If you haven’t been following along with Rubicon’s development, I can’t really blame you: it’s been an on-again-off-again affair for a few years now and the way to “follow along” has been to monitor a git repo. I may have some time for explaining at some later date, but for right now, let’s take a side-track into some functional programming in C++, and solve a sudoku or two. I guess you know what a sudoku looks like: a nine-by-nine square grid of numbers between 1 and 9, inclusive, divided into cells of three-by-three, rows and columns. No cell, row or column may contain more than one of each number, and you’re usually provided with a subset of the numbers in the final puzzle – the fewer of those you get, the harder the puzzle is. We’ll call this the Field.

In C++, it is generally easier to represent an array that we want to pass around as a struct containing an array, so that’s what we’ll do here as well. Hence, this will look a bit like:

Any position in the field can have one of nine values, which can be known or unknown. If unknown, the position has up to nine candidate values (1 through 9), in a “superposition” of those values, which we can represent as an array of nine booleans. When solved, only one of those booleans will remain as true:

That means we can also represent the Field as:

This is where C++ shines: we can template the Field struct according to the type of the individual values to distinguish the two types, while retaining the same, descriptive, name:

Note that C++ doesn’t allow assigning a literal array directly to an array-type variable, so we have to initialize a local variable candidates with the value and copy it on.

As you can see, we use the standard transform function from the STL to iterate through the values in the input field, convert each of them to their final value (or 0 if there’s more than one candidate), and output the result into the return value.

A note on the style

I said we’d be doing some functional programming. Functional programming is a paradigm in which functions do not have side effects: they take parameters as their input and, based only on those parametets and nothing else determine the output. This allows for a style in which you don’t have to wonder about what the state of your progam is to understand what’s going on. This is very useful in multi-threaded programming because you can get rid of most places in the program where threads need to synchronize, which in turn gets rid of deadlocks, race conditions, and a large number of other types of problems.

I don’t intend to push a full-blown pure functional implementation of a sudoku solver in C++ here, implementing the whole thing without local variables and using pure functional programming in a non-pure language like C++: my intent is to use a functional style in which a function does what it does with its parameters, and without producing side-effects, but is still allowed to have local variables and loops so we don’t have to rely on recursion for everything. 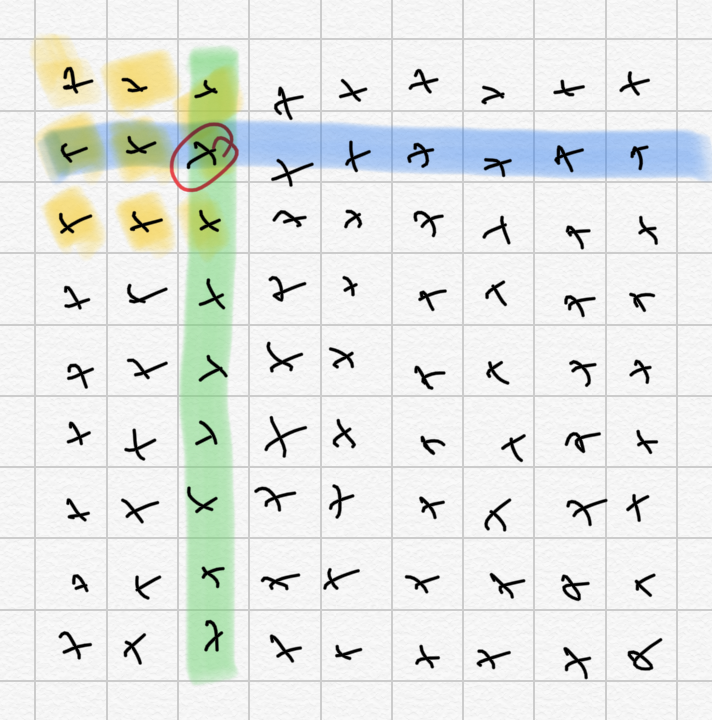 To solve any position in the field, we need to know all the values in the same row, the same column, and the same cell.

A column consists of all indices mod 9 (so for any value, any other value that has the same index mod 9 is in the same column.

A cell is somewhat more complicated to identify: 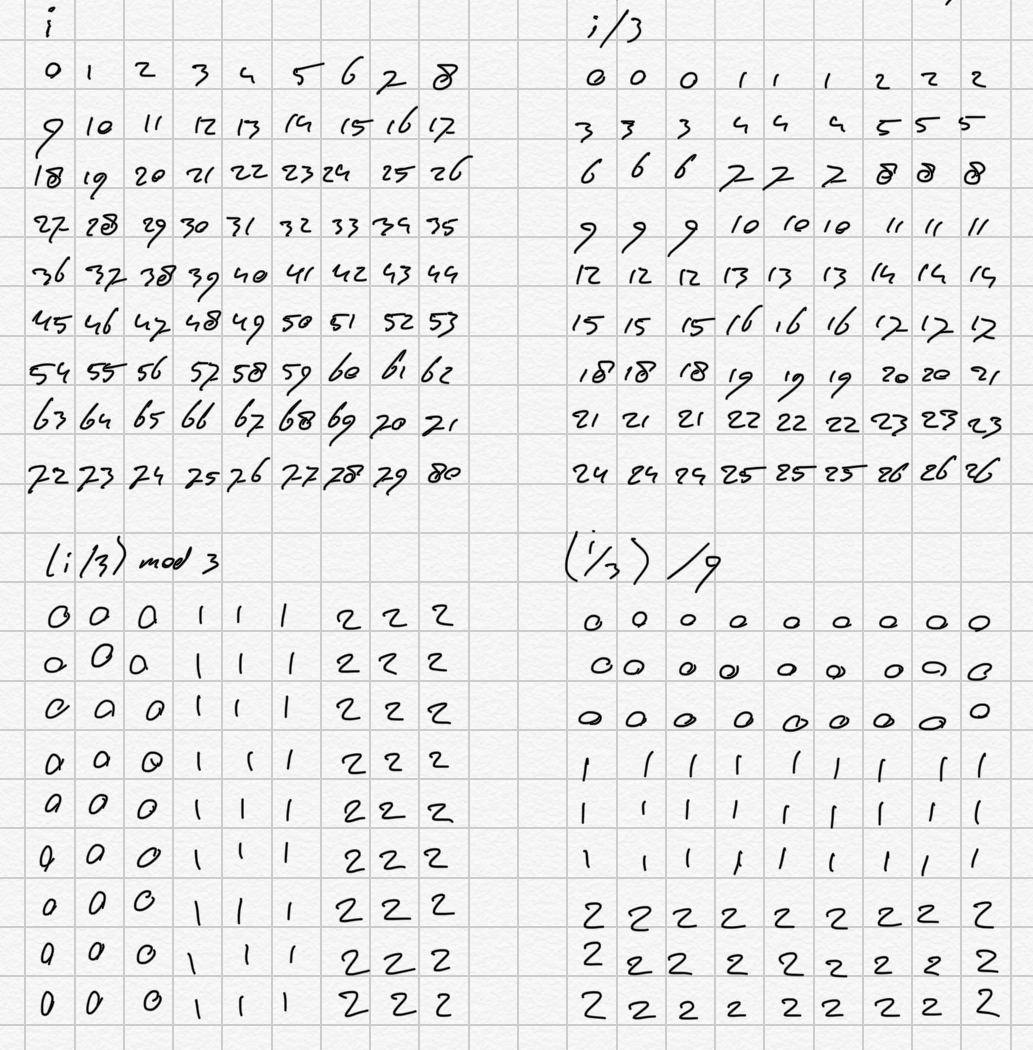 We can translate all of this to code as follows:

We can find any position in the same row, column or cell as follows:

Hence, we now have a function to transform Field< int > to Field< Position >, and a function to find all other positions in the same two, column or cell. We can now solve for a position by eliminating from the candidates any value that has already been assigned to another field in the same row, column or cell. That is not enough to solve a sudoku, but it goes a long way.

Once this function has stopped making progress, we can check each cell to see if there’s more than one candidate for a given value. If there is only one, we “promote” the position in question to that value by removing other candidate values from it. To do this, the function is fairly straight-forward: we already have a function to get all the indices in the same cell, and we know the indices of the upper-left corner of every cell: 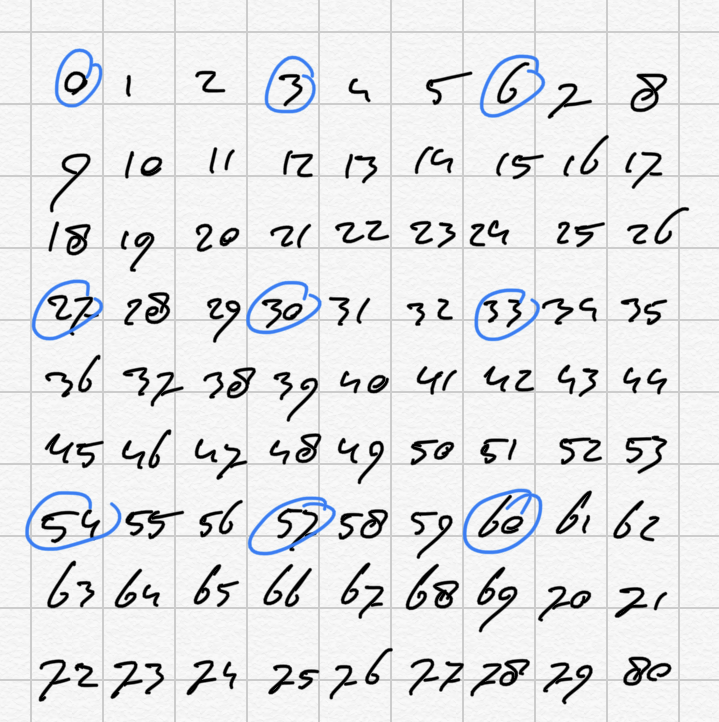 So for each cell we can find the candidates for each number. If there is only one, it must be that number (in which case we preomote it if it didn’t already know).

To do this, we select the cells the same way as we did before. From each cell, for each value:

With this algorithm in place, we can solve the vast majority of sudoku puzzles. There are other strategies we can employ, however:

Check out the code and try to add some of these yourself!